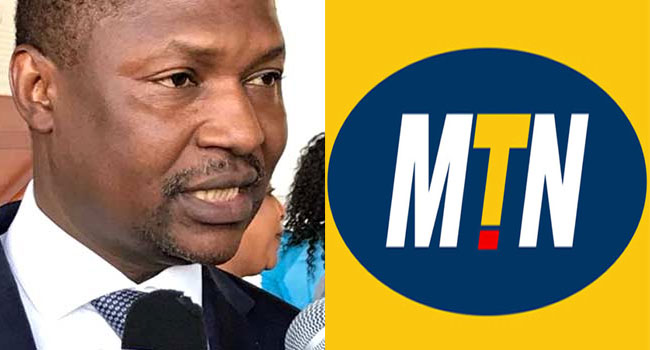 The Federal High Court sitting in Lagos has struck out a N3bn fundamental rights enforcement suit filed by telecommunications firm, MTN Nigeria, against the Attorney General of the Federation, Abubakar Malami (SAN).

Justice Chukwujekwu Aneke struck out the suit after being told by Malami’s Counsel, Habibat Ajana that the AGF by a letter dated January 8, 2020, had reviewed the issue against MTN and decided to withdraw its demand letter for a $2bn tax.

MTN’s lead counsel, Chief Wole Olanipekun (SAN), responded by saying that having withdrawn the demand letter, his client would drop its fundamental rights suit against the AGF. Justice Aneke, therefore, struck out the suit. In the suit, MTN had asked the court to award N3bn against the AGF for rights infringement.

The telecommunications firm filed the suit to challenge an August 20, 2018 letter written to it by the AGF, demanding $2bn alleged unremitted tax. The AGF in its letter had accused the MTN of unpaid taxes on foreign payments and imports and had subsequently asked it to pay approximately $2billion in relation to the taxes.

National Assembly raises its own budget from N125bn to N128bn