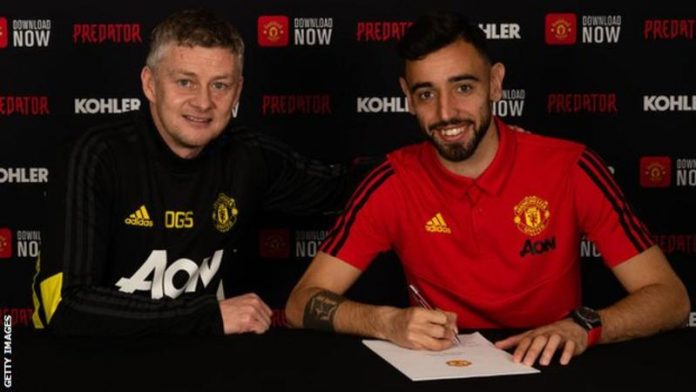 Bruno Fernandes says he will give “everything” to bring “success and trophies” to Manchester United after joining on a five-and-a-half year deal from Sporting Lisbon. The midfielder, 25, has joined for 55m euros (£47m) but add-ons could increase the overall cost to 80m euros (£67.7m). “For me to now play for Manchester United feels incredible,” said Portuguese international Fernandes.

Manager Ole Gunnar Solskjaer said the midfielder was a “fantastic addition”. Fernandes’ move is the biggest in the Premier League so far during the January transfer window – with the deadline at 23:00 GMT on Friday. He follows Cristiano Ronaldo, Nani and Marcos Rojo in joining Manchester United from Sporting.

His deal, which runs until 2025, also has an option to extend for a further year. “My love of Manchester United really started when I used to watch Cristiano Ronaldo play and ever since then I have been a big fan of this great club,” added Fernandes.

GROUP APPEALS FOR PATIENCE WITH THE STATE OF THE NATION

JUST IN: Buhari arrives in Borno