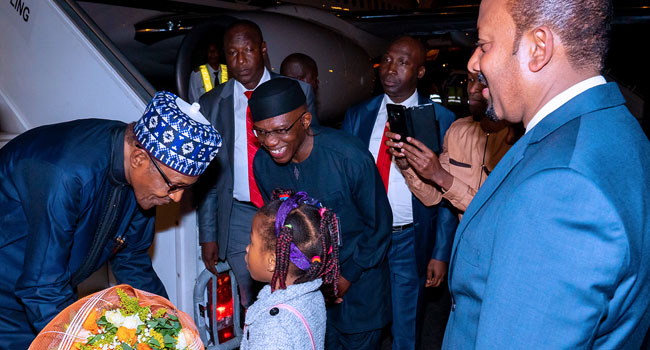 President Muhammadu Buhari has arrived in Ethiopia for the 33rd Ordinary Session of Heads of State and Government of the African Union (AU). The President’s aircraft touched down in Addis Ababa, the Ethiopian capital city on Friday evening hours after he left Abuja.

He was received by the Prime Minister of Ethiopia, Abiy Ahmed, and Nigeria’s Ambassador to the North African country, Ambassador Bankole Adeoye, among others. Earlier, the Presidency in a statement said President Buhari would be with other leaders from the 55-country organisation for the AU Summit with the theme, “Silencing the Guns: Creating Conducive Conditions for Africa’s Development.”

The meetings, according to the statement, will precede the 33rd Ordinary Session of the Assembly.

MANY FEARED KILLED AS TANKER EXPLODES ON LAGOS-IBADAN EXPRESS