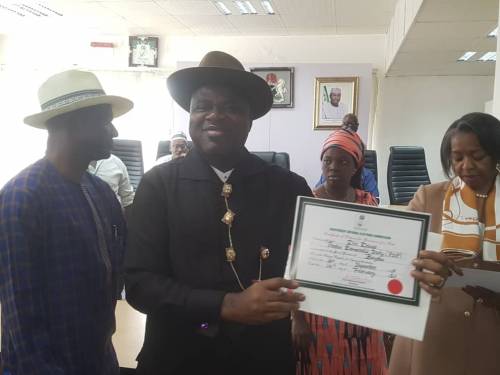 The Independent National Electoral Commission (INEC) has presented the Certificate of Return to Senator Douye Diri. The electoral commission in a briefing at the commission’s headquarters in Abuja declared the Peoples Democratic Party (PDP) candidate winner of the November 16 Bayelsa governorship election.

INEC Chairman, Mahmood Yakubu told journalists that Diri was declared the winner after top officials met on Friday morning to review the results of the election, without the votes of the APC which have been voided by the court. “The total votes cast after excluding those of the APC now stand at 146,999. PDP polled 143,172 and scored 25 percent as required by the law,” Yakubu said during the briefing.

Diri’s victory follows Supreme Court verdict which sacked David Lyon, and his Deputy, Biobarakuma Degi-Eremieoyo. Justice Ejembi Ekwo, who read the lead judgment on Thursday made the orders after disqualifying the APC’s deputy governorship candidate, Degi-Eremienyo, as a candidate in the election for submitting forged certificates to INEC.