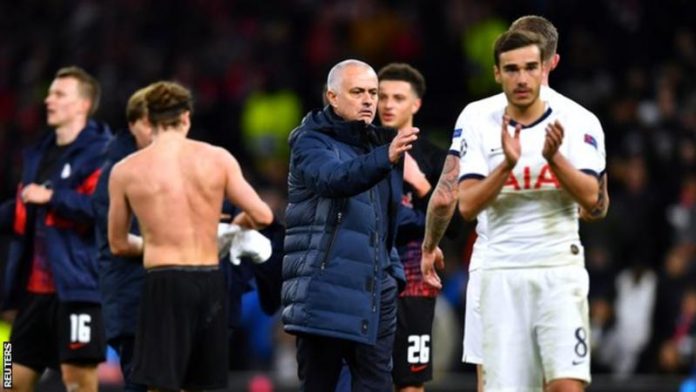 Tottenham playing RB Leipzig in Wednesday’s 1-0 loss was like “going to fight with a gun without bullets”, says Jose Mourinho as he bemoaned the recent injuries to key players.

Spurs were without potent forward duo Harry Kane and Son Heung-min, and neither substitute Erik Lamela and Tanguy Ndombele was fully fit. “We are really in trouble,” he said. “If it was just this game I’d say no problem but we have FA Cup and Premier League games.”

Mourinho was interviewed by BT Sport’s Des Kelly who he sarcastically thanked, referring to the scheduling of Spurs’ next match – against Chelsea on Saturday at 12:30 GMT, which is being shown by the broadcasters. The London club then play Wolves, Norwich in the cup and Burnley before the return leg in Germany on 10 March.

Tottenham were outplayed by Leipzig, whose goal was scored by Timo Werner, although they improved after Dele Alli and Gedson Fernandes were replaced by Lamela and Ndombele.