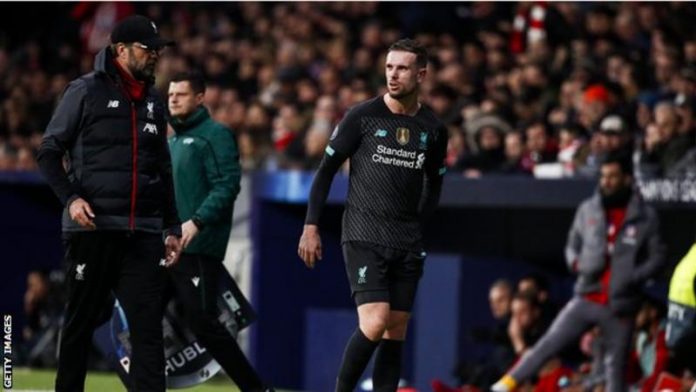 Liverpool captain Jordan Henderson will miss about three weeks with a hamstring injury, says manager Jurgen Klopp. Henderson, 29, was forced off late on in Liverpool’s 1-0 Champions League defeat by Atletico Madrid on Tuesday.

The midfielder has made 34 appearances for the runaway Premier League leaders this season, scoring three goals. “We have heard of different hamstring injuries in the Premier League – Harry Kane for example – but it’s not that bad,” said Klopp on Friday. Tottenham striker Kane – an England team-mate of Henderson – has had surgery on a torn hamstring sustained on 1 January and is not expected to return to training until April.

Klopp added: “[Henderson] will be out for three weeks or so, which is not cool but how we see it is we were still lucky.” Over the next three weeks the Reds have Premier League matches against West Ham United, Watford and Bournemouth, an FA Cup fifth-round tie at Chelsea and the return leg against Atletico in the last 16 of the Champions League.

The European champions go to Everton for the Merseyside derby on 16 March.