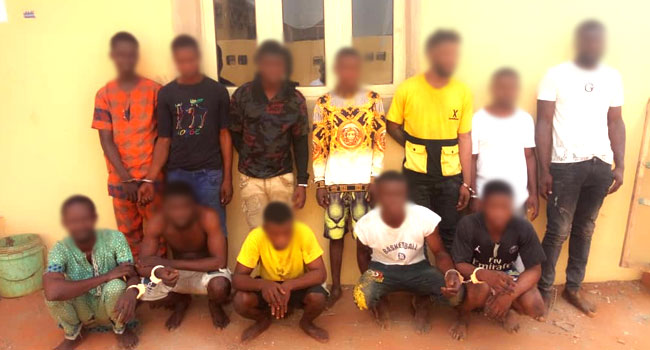 The Lagos State Police Command has arrested 17 suspects for cultism and violence in the Ijora Badia and Ikorodu areas of the state. A statement on Sunday by the Police Public Relations Officer in the state, Bala Elkana, revealed that the suspects were arrested in batches of five and 12.

Elkana explained that two rival cult groups armed with dangerous weapons engaged themselves in a battle for supremacy at Iso Isu in Ijora Badia and inflicted various degrees of injuries on each other on Friday last week. He said the police got a distress call and mobilised police operatives from Ijora Badia Division and Special Strike Force on Social Miscreants from the Command Headquarters to the area where five suspects were arrested.

The suspects are Olaniyi Abiodun, Emola Kamal, Muritala Gbadeyanka, Kadiri Bashorun, and Adebayo Ebiesuwa, all between ages 18 and 28 years. “They belong to Aiye and Eiye confraternities,” Elkana said. Similarly, suspected members of the two cult groups attacked each other on Sunday at Ladega area in Ikorodu where one Lateef Akinpelu was seriously injured.