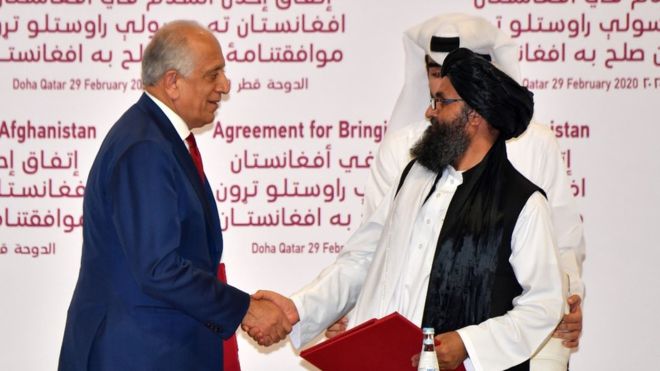 The US and the Taliban have signed an agreement aimed at paving the way towards peace in Afghanistan after more than 18 years of conflict.

The US and its Nato allies have agreed to withdraw all their troops from the country within 14 months if the militants uphold the deal. US Secretary of State Mike Pompeo and Taliban leaders attended the signing ceremony in Doha in Qatar. Talks between the Afghan government and the Taliban are due to follow.

Under the agreement signed in Doha, the militants also agreed not to allow al-Qaeda or any other extremist group to operate in the areas they control. The US invaded Afghanistan weeks after the September 2001 attacks by the Afghanistan-based al-Qaeda group.

More than 2,400 US troops have been killed during the conflict. About 12,000 are still stationed in the country. President Trump has promised to put an end to the conflict.