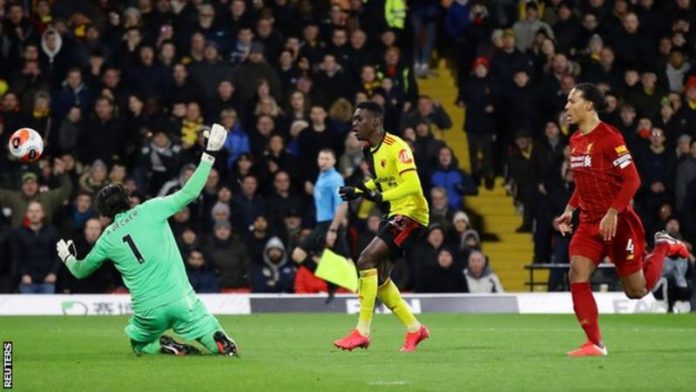 Liverpool’s hopes of remaining unbeaten for an entire Premier League season were ended in sensational style by a rampant Watford at Vicarage Road. Ismaila Sarr scored twice while captain Troy Deeney added a third in a sparkling second-half display from the hosts as Liverpool’s run of victories was brought to a shuddering halt.

The Reds had won their past 18 Premier League games and another at Vicarage Road would have made history as the longest winning run in the English top flight. But they never got going against a Watford side who were superb from start to finish and who move out of the relegation zone as a result.

The Hornets had more chances in the first half and only a superb save from Alisson, to deny Troy Deeney, prevented them from leading at the break. However, Watford deservedly went in front when Abdoulaye Doucoure squeezed a cross in from the left and the impressive Sarr was there to stab in.