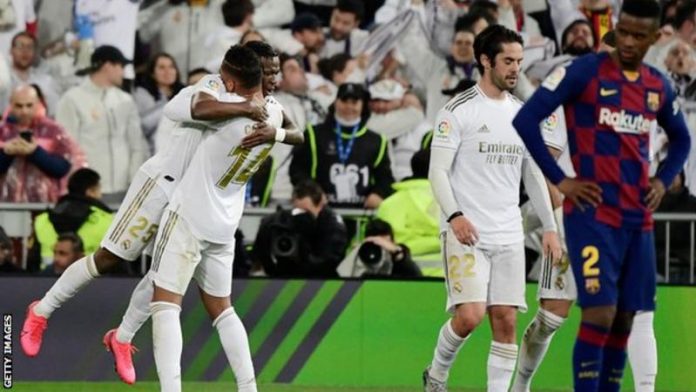 Real Madrid beat Barcelona in a captivating El Clasico to move above their rivals at the top of La Liga. Vinicius Junior drove in via a deflection in a second half packed with chances after Isco saw a shot saved and an effort cleared off the goalline.

Karim Benzema volleyed over for Real and substitute Martin Braithwaite went close for Barca moments before Vinicius sparked celebrations at the Bernabeu. Substitute Mariano struck in added time as Real moved a point clear of Barca.

Mariano had not played a single minute in La Liga for Zinedine Zidane’s side this season until being brought off the bench in injury time to seal a memorable win. Los Blancos finished third last season – 19 points behind champions Barca – but the tight nature of the title race this time around placed added significance on the fixture in the Spanish capital.

Zidane had said his side were in a “delicate moment” as a result of picking up one point from their last two league matches and having suffered a home defeat to Manchester City in the Champions League in midweek.