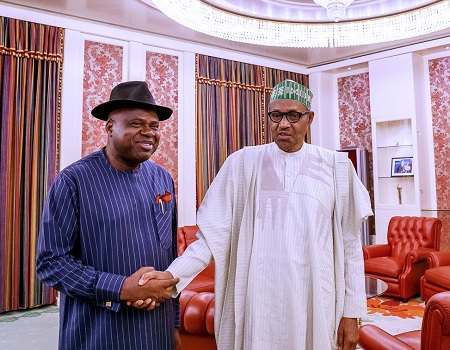 President Muhammadu Buhari and the Governor of Bayelsa State, Mr Diri Douye, have just held a meeting at the Presidential Villa, Abuja. The brief meeting ended about 1.39pm. Douye, who said Buhari received him as “one of his sons”, explained that he went to Aso Rock to greet the President and formally present himself to him as the father of the nation.

He told State House Correspondents after the meeting that the visit was the first time he did so formally since his inauguration on February 14. The governor spoke further, “Since my inauguration, this is the first time I have come to see Mr President and to promise to work with the Federal Government for the security and peace of the nation.

“He received me as one of his sons. “He went ahead to advise me and to say that he is happy that I came and that he is happy with the way I started. “He said he read about all the statements I have made on security. Bayelsa is critical to peace in the country. If there is security there, then the whole country is at peace.”

Recall that Douye became the governor of the state following the February 13 judgment of the Supreme Court, which sacked the All Progressives Congress Governor-elect, Mr David Lyon, just 24 hours to his inauguration at that time.

Security in Nigeria has deteriorated, loss of lives unacceptable – Senate...