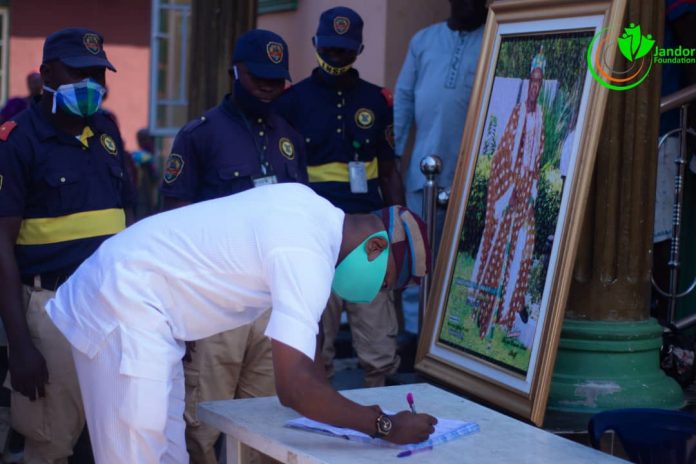 As the people of Iba kingdom continue to mourn the demise of their King, Oba Yishua Goriola Oseni, the Oniba of Iba Kingdom, the Lead Visioner of Team Jandor, Mr. Abdul-Azeez Olajide Adediran, paid a condolence visit to Iba Town.

Jandor, on Tuesday, led a few representatives of both the team Jandor and Ibile Eko forum to the palace of Oniba. The moderate entourage was welcomed by the Chairman of Iba Local Council Development Area, Hon. Ramat-Rachael Oseni, Chiefs and The Oloris. Oba Oseni who joined his ancestors at age 76 was described as a courageous Awori King who stood his ground in true representation of his people.

Jandor while signing  the condolence register in honour of the late Lagos state first class king added that “we have lost not only a rare gem, but a generalissimo of Aworiland who till his last breath was at the fore front of emancipation and development of Aworiland”. Jandor said his exemplary leadership lifestyle is enough consolation for all Awori Sons and Daughters. “Oniba Ekun, Omo Oloto Awori Ile Omo, Omo Akepe Lojo Oran, Omo Afeje Yan Eja. Your rich counsel will be greatly missed but we will not forget the little you we earned from you”.

“The best way to live the legacy that Kabiyesi built is not to relent on the course of making Lagos work for Lagos”, he noted. After leaving the palace, Jandor made a quick courtesy visit to his cousin who is equally the representative of Ojo Constituency 2 at the state House of Assembly, Hon. Surajudeen Tijani popularly known as Emir. He also stopped by to see the Lagos state Chairman of NNAMORAL, Alhaji Sulaiman Adesina Raji (Jafo Authority).

Coronavirus: EU to tighten vaccine exports amid row with AstraZeneca