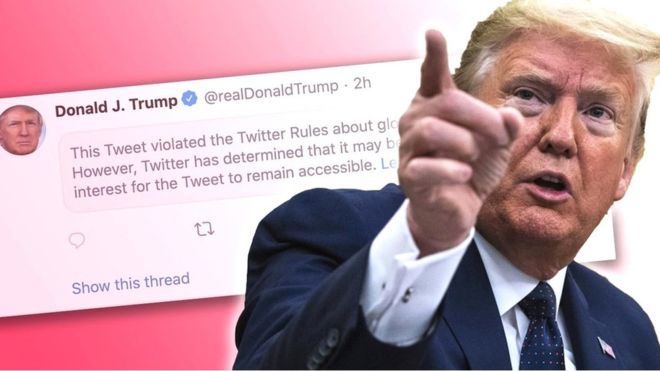 Twitter has hidden one of President Donald Trump’s tweets from his profile, saying it violates rules about glorifying violence. But instead of being deleted, it has been replaced with a warning and can be viewed by clicking on it.

The warning says “Twitter has determined that it may be in the public’s interest for the Tweet to remain accessible.” It is the latest in an escalating row between Twitter and the White House. Mr Trump was tweeting about the US city of Minneapolis, which has seen consecutive nights of protests following the death of a black man in police custody.

The president said he would “send in the National Guard”, and followed that up with a warning that “when the looting starts, the shooting starts.” That second tweet was hidden by Twitter for “glorifying violence”.

Twitter’s policy of adding a warning to, rather than deleting, tweets that break its rules when it comes to major public figures was announced in mid-2019. But the social network has never used it on Mr Trump – nor deleted any of his tweets before.