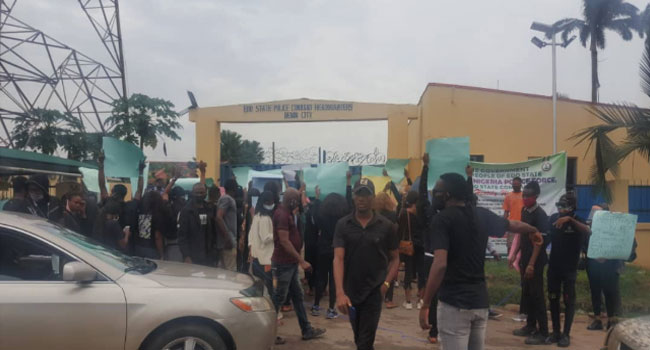 Protesters including students of the University of Benin (UNIBEN), activists and concerned individuals on Monday stormed the headquarters of the state police command in Edo State demanding justice for Vera Uwaila Omozuwa.

Uwaila, a 100-level student of the Department of Microbiology in UNIBEN was reported to have been raped and killed by some hoodlums inside a church where she went to read at the Ikpoba Hill area of Benin City, the Edo State Capital.

This sparked outrage with #JusticeForUwa dominating social media trend on Sunday. The protesters wearing black outfits and bearing placards decrying rape staged a walk from the Kings Square area of Benin City and eventually took their message to the state police command headquarters.

The deputy Commissioner of Police, operations, Ayoola Ajala who received the protesters, assured that investigations have commenced and arrests have made in connection to Uwa’s murder.