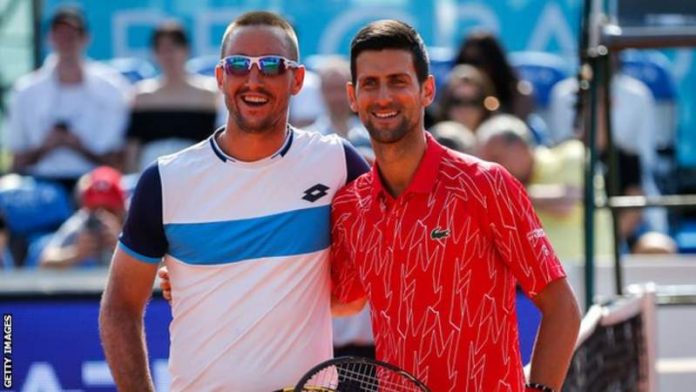 Novak Djokovic lost one of his two opening matches at the Adria Tour, as elite men’s tennis returned for the first time since being suspended due to the coronavirus pandemic. The world number one, 33, cruised past fellow Serb Viktor Troicki 4-1 4-1 in Belgrade in just 34 minutes. He then lost 4-2 2-4 1-4 to world number 32 Filip Krajinovic.

Djokovic set up the tournament to help players get back to match fitness after several weeks of no competition. The cross-Balkan event has a reduced match format and attracted 4,000 fans. But the tournament’s third leg, scheduled to take place in Montenegro, has been cancelled because Serbian citizens are banned from entering the country amid the coronavirus pandemic.

Djokovic said “several alternative options and locations” are being looked at but added that they are “running out of time”. At one point during Djokovic’s opening victory in Serbia’s capital, Troicki enlisted the help of a ball boy, allowing him to return two of the 17-time Grand Slam singles champion’s serves.

The evening session began with a shock as Serbian world number 145 Nikola Milojevic, who was a late replacement for the injured Damir Dzumhur, beat Bulgarian world number 19 Grigor Dimitrov 4-1 4-3.

NOA TO COME UP WITH NEW MEASURES TO MAINTAIN GAINS OF...

NEW LAWMAKERS CHARGED TO LIVE ABOVE BOARD

THE OPEN: PHIL MICKELSON LEADS IN THE CLUBHOUSE AT ROYAL TROON