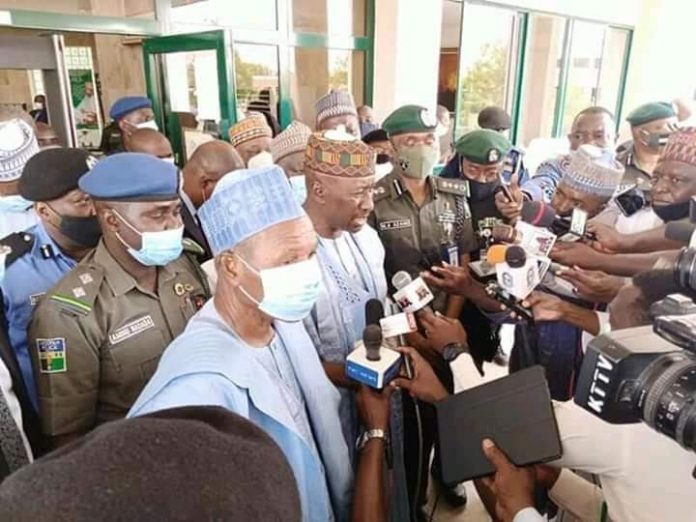 The National Security Adviser, Babagana Monguno, the Inspector General of Police, IGP Muhammed Adamu, the Director-General of the Department of State Services, Yusuf Magaji have arrived Katsina State over the security situation in the state.

The IGP was joined by other security stakeholders led by the Commissioner of Police in the state, Sanusi Buba. On arrival at the General Muhammadu Buhari Government House, the team had a closed-door meeting with Governor Aminu Masari over the recent wave of banditry and other crimes in the state.

Speaking to reporters shortly after the 2-hour meeting, Monguno said the visit was in response to the occurrences in the last couple of weeks and to know the underlining causes of the problems from a collective point of view.

While lamenting the spate of attacks in the state, the NSA is however optimistic that security agencies can effectively deal with the criminal elements unleashing mayhem on the people. According to him, there is a need to make the people within the communities to have confidence in the security operatives.

Electoral Act: Your election can be annulled, Gbajabiamila tells appointees yet...

BUSTED! 147 victims rescued from another centre in Kaduna

2023 Presidency: PDP group asks Atiku to step aside for younger...