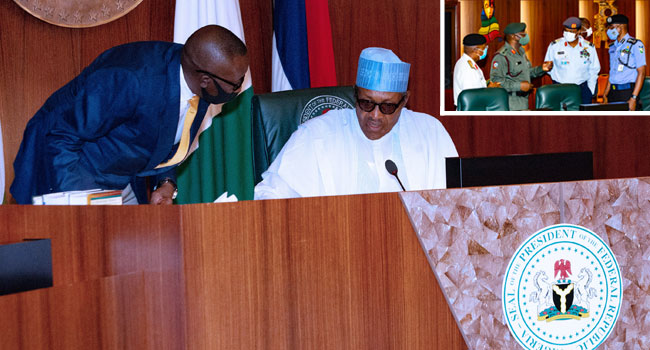 The President is not pleased with the way insecurity is being handled in many parts of the country and is not mincing words about it. This indication came after President Muhammadu Buhari met with the Service Chiefs on Thursday at the Presidential Villa in Abuja, the nation’s capital.

He warned the heads of the nation’s security agencies that excuses would no longer be tolerated and asked them to do more to secure the nation and its people. While the services chief are trying their best to tackle the issue of insecurity in the country, President Buhari insisted that their best is not good enough.

The National Security Adviser (NSA), Retired Major General Babagana Monguno, disclosed this to State House correspondents at the end of the meeting. He added that the President has ordered him to meet with the state governors in the North-West and that of Niger State, in other to identify the problems and find solutions to them.

President Buhari met with the service chiefs against the backdrop of bandit attacks on communities in the region, including those in his home state of Katsina. The attacks left several people dead and many others injured in the affected states, while lots of properties were destroyed by the bandits. This sparked criticism over the worsening insecurity in the country, especially the North West where the armed men have wreaked havoc in recent times.

BREAKING: One dies, 14 recover from COVID-19 in Lagos