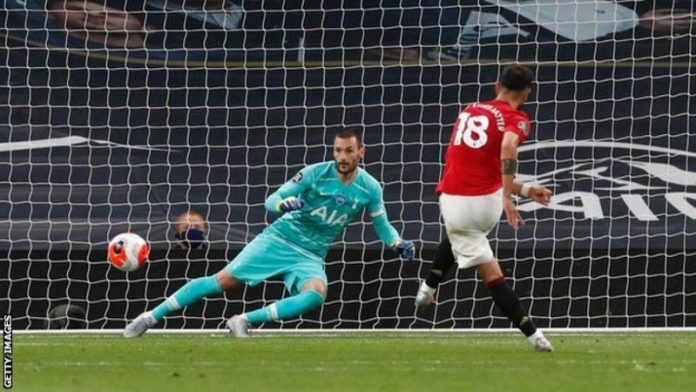 Paul Pogba returned to action for first time since 26 December to win the late penalty that earned Manchester United a crucial point at Tottenham Hotspur.

Pogba, who had not played for almost six months because of an ankle injury that needed surgery, emerged as a second-half substitute and demonstrated he has the creativity to make a difference as United battle for a place in the top four.

United keeper David de Gea was badly at fault when he failed to stop Steven Bergwijn’s powerful 27th-minute drive, so there was relief all-round for the visitors when Pogba surged into the area before he was hauled down clumsily by Eric Dier.

In the cavernous spaces of the deserted Tottenham Hotspur Stadium – as the match was played behind closed doors – Fernandes equalised with an emphatic penalty.

Spurs survived a last-minute scare as referee Jon Moss pointed to the spot again when Dier collided with Fernandes but the video assistant referee correctly reversed a poor decision.