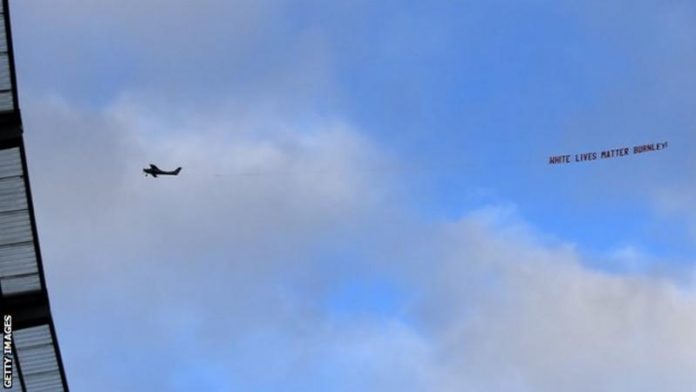 Burnley are “ashamed and embarrassed” by a banner reading ‘White Lives Matter Burnley’ that was towed by an aeroplane over Etihad Stadium during Monday’s match against Manchester City. The aircraft circled over the stadium just after kick-off in City’s 5-0 win.

“It’s a minority of our supporters – I know I speak for a massive part of our support who distance ourselves from anything like that. “It definitely had a massive impact on us to see that in the sky. “We are embarrassed that our name was in it, that they tried to attach it to our club – it doesn’t belong anywhere near our club.”

In a statement, Burnley said that the banner “in no way represents” what the club stands for and that they will “work fully with the authorities to identify those responsible and take appropriate action”. “Burnley strongly condemns the actions of those responsible for the aircraft and offensive banner,” the statement added.

Christian Eriksen to have heart-starting device fitted after collapse

World Cup 2022: Tournament set to start one day early with...