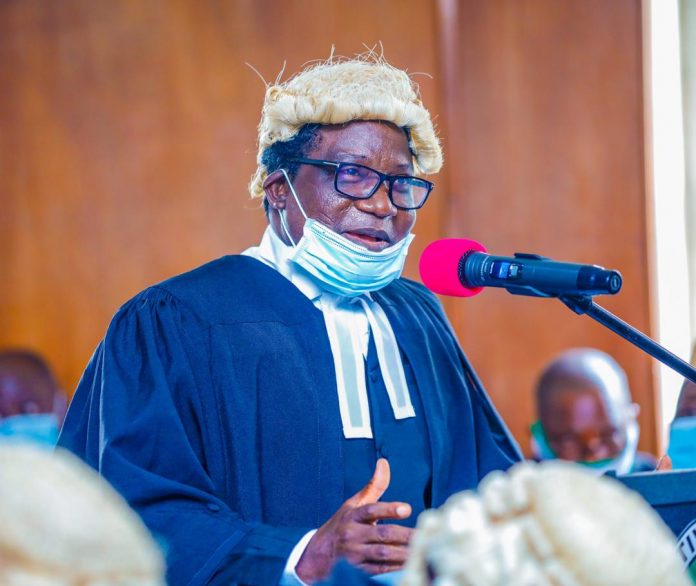 Plateau State Governor Simon Bako Lalong says all Nigerians must support the judiciary particularly judges in the dispensation of justice and the sustenance of the rule of law which is key to the survival of democracy. Governor Lalong said this at the valedictory court session in honour of the retiring President, Plateau State Customary Court of Appeal Hon. Justice Julia Asabe Kyentu who is retiring after attaining the age of 65. Lalong who praised Justice Kyentu for serving the Judiciary meritoriously, described her as a superb judicial officer who contributed immensely to the development of the bench and bar.

He said “for those who know Justice Julia Kyentu either within or outside the courtroom, the experiences may vary, but the testimony of her integrity, hard work, intellectual capacity and judicial depth is the same. Hon. Justice Julie Kyentu has over the years not only demonstrated her deep knowledge of the law and its application to the dispensation of justice, but has also shown courage to administer justice without fear or favour, affection or ill will”.

Lalong said as a woman, Justice Kyentu is among the roll call of distinguished Plateau daughters who have broken the ceiling to establish the fact that women are more than capable of performing any function in society if given the opportunity. He urged both members of the bar and bench to do everything possible to safeguard the integrity of the Judiciary which is not only the hope of the common man as commonly referred to, but the hope of democracy, good governance and societal development. He assured that his administration will continue to support all efforts at deepening reforms in the judiciary to make it more effective.

Chief Judge of Plateau State Hon. Justice Yakubu Gyang Dakwak described Justice Kyentu as an astute judicial officer who put in her best in delivering justice to all manner of persons without fear or favour. He said the Plateau bench will miss her greatly and the vacuum created will be difficult to fill.