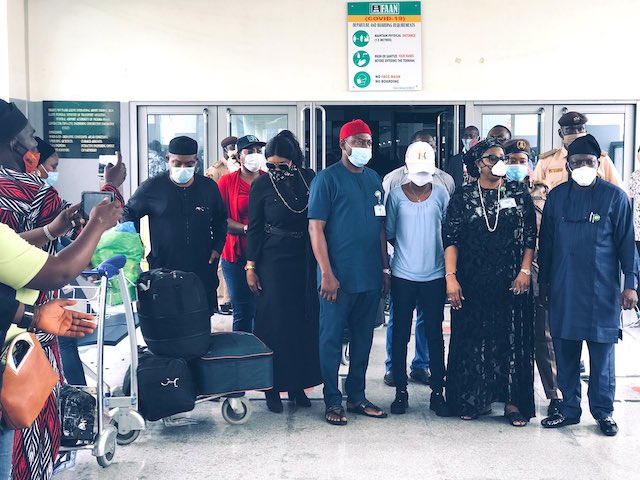 After several months of negotiation between the Nigerian government and the Lebanese authorities, Temitope Arowolo and 29 other Nigerian girls held captive in Lebanon finally arrive the country on a chartered Lebanese airliner.

The House of Representatives House Committee on Diaspora and the National Agency for the Prohibition of Trafficking in persons were on hand to receive the victims who lamented their harrowing experience in Lebanon.

It was a sigh of relief for everyone most especially members of the House of Representatives committee on Diaspora and NAPTIP when the 29 Nigerian girls traded as domestic slaves in Lebanon were finally handed over to them.

The visibly elated Chairperson of the Committee Rep. Tolulope Sadipe could not hide her joy after months of negotiation with the Lebanese authorities. She called on all the relevant security agencies in the country to join hands in stamping out human trafficking both at home and abroad.

The Director General, National Agency for the Prohibition of Trafficking in persons who was also on support of the chairman’s plea,  Promised to take care of the victims vowing also to strengthen the war against traffickers.

For Temitope Arowolo, she recalled a painful experience which according to her she never would wish her enemy. One of the victims whose name was given simply as Chidubem to shield her for security reasons also took journalist through her ordeals. She is presently on a wheelchair after suffering some ailment in the course of serving her master as a domestic maid.

Harry and Meghan: No other option but to step back, says...

I wasn’t elected to fight the Executive but to collaborate, says...