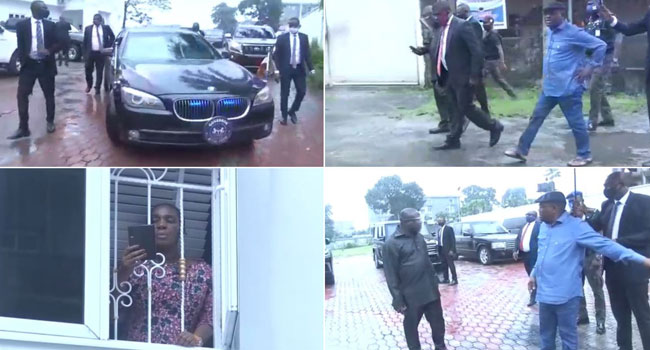 The security operatives stormed Nunieh’s residence at about 4 a.m on Thursday and are said to have attempted to break into her apartment for hours without success. Ms. Nunieh reached out to the Rivers State governor who swiftly responded to her distress call and came with his aides to challenge and stop the attempted arrest.

Governor Wike could be seen visibly displeased at the incident. The clip showed the governor asking the security agents for their warrant, and trying to ascertain why Ms. Nunieh was not invited over rather than having her house besieged.

Wike eventually asked the operatives to leave the former NDDC MD’s premise, an ordered which was grudgingly complied with. Afterward, the governor asked Ms. Nunieh to get into a vehicle in which she was transported back to the State House where she is currently taking refuge.

Insurgency: It may take long but we are capable of handling...