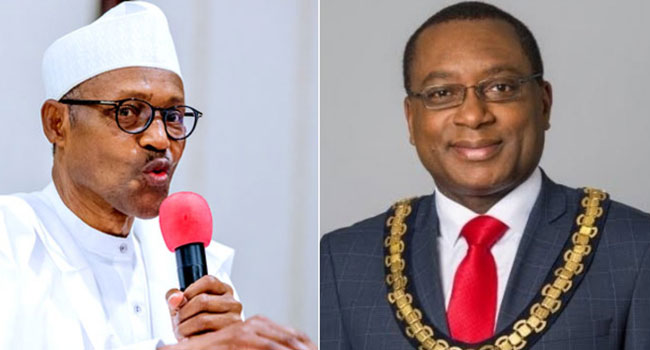 President Muhammadu Buhari has expressed delight at the news of the appointment of Professor Charles Egbu, from Anambra State, as Vice-Chancellor of Leeds Trinity University, United Kingdom. The President felicitates with the academic, who is the first black person appointed helmsman of a ranked university in the UK, urging him to continue to proudly hold the flag of Nigeria aloft in all his endeavors in the elevated position.

“With wide experience as Pro-Chancellor at the University of East London, Dean of the School of Built Environment and Architecture at London South Bank University, and stints at University of Salford, University College London, Glasgow Caledonian University, Leeds Beckett University, among others, I have no doubt that you will acquit yourself creditably once again in this new assignment,” President Buhari says.

He adds that Professor Egbu, a foremost Quantity Surveyor with 12 books and over 350 publications to his credit, is a worthy example of an industrious Nigerian, whom the younger generation should adopt as a role model. The President urges the new VC, who assumes office in November, to build on the strong foundations laid by his predecessors at the university, where he is equally an alumnus.

Professor Charles Egbu was recently appointed Vice-Chancellor of Leeds Trinity University. This was confirmed on the UK varsity’s website on Tuesday the 14th of July, 2020. He takes over from Margaret House, who will be stepping down after seven years.

Man Utd: Alexis Sanchez will ‘prove you all wrong’ – Ole...

MY TRIAL IS PROSECUTION, NOT CORRUPTION, I WON’T RESIGN – SARAKI