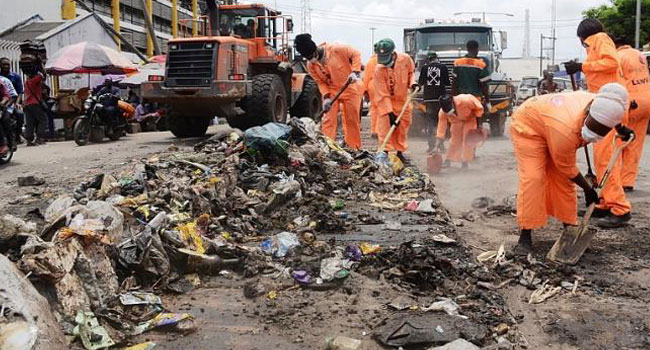 The Lagos State Government has insured street sweepers in the state owing to the risks they face while discharging their daily duties. This was confirmed by the Lagos Waste Management Authority in a statement issued on Friday.

LAWMA noted that the development is to ensure that the welfare of the sweepers in the state is being taken care of. While describing the workers as front liners in the management of waste in the state, the agency praised them for their efforts in ensuring that the megacity remains squeaky clean.

Under the LAWMA CEO programme, the insurance policy will cover amongst others: death while in active service, permanent disability and medical expenses.

The waste agency explained that its acting “Managing Director, Ibrahim Odumboni, has made a resolve and unequivocally so, that the primary focus and the mandate of the Authority in managing and regulation of waste will not be compromised, deploying the best global practices in achieving same, in line with the “THEMES” agenda of Mr. Governor, Babajide Sanwo-Olu in achieving a cleaner and healthier environment and the general well-being of Lagosians.”

Buhari inaugurates committee to lift 100 million Nigerians out of poverty