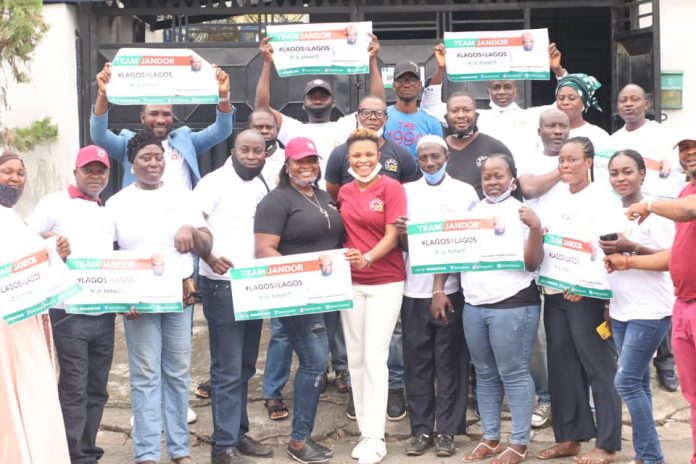 The euphoria of the staunch supporters of Team Jandor got a boost on Thursday, at the inauguration of the Local Chapters of the Lagos Sociopolitical group. Team Jandor which had its tentacles spread across the three senatorial district of Lagos State kicked – off the Swearing in of the Local Government and the Local Council Development Areas executives, starting from Surulere, Coker – Aguda and Itire – Ikate respectively.

While inaugurating the LGA/LCDAs Executives, the Central Coordinator of the group, Funke Ijayekunle, said “the journey of Team Jandor started in 2017, building on the legacies of the Lead Visioner, Mr. Abdul – Azeez Olajide Adediran, who has over the last decade sponsored and delivered exceptional humanitarian projects across the state.”

Ijayekunle noted that the group had rested on the conviction of the Lead Visioner that “we should collectively ‘wage war against poverty and not the poor”.

Reeling out the programmes of Team Jandor in the last three years, she said the group has delivered on various projects,  including; the sponsorship of a Scholarship scheme for more than one hundred students spread across tertiary institutions, donation of a fully equipped ICT centre to a riverine community, delivery of several empowerment programmes for the widows and senior citizens including those who have served the state but are not as lucky to be served in return when mostly needed, as well as the sponsorship of sports competitions, and capacity building programmes for the youth, amongst other selfless services.

Speaking at the sideline, the coordinator of Surulere LG, Okikiade Emmanuel, appreciated the state executives for their selfless service towards the accomplishment of the vision of the group. Emmanuel, however, acknowledged the Lead Visioner, Mr. Abdul – Azeez Olajide Adediran, for finding the executives worthy to serve in different capacities. He assured him of their best towards making the dream of ‘Lagos for Lagos’ come true.

While wishing the new inaugurated officer a successful tenure, the Central Coordinator welcomed them officially to the ‘big happy family’.