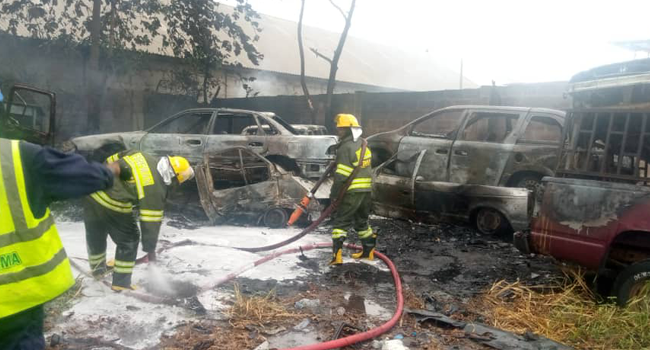 A fire at the office of the Lagos State Traffic Management Agency in Oshodi on Friday razed 10 cars and a trailer. The fire started at a section of the agency’s premises where impounded vehicles were kept but its cause could not be ascertained by witnesses.

After emergency service officials battled and put out the fire, the Lagos State Emergency Management Agency (LASEMA) revealed that no life was lost as a result of the fire.

“A total number of ten cars and one trailer were razed by the inferno,” the LASEMA Director-General, Dr Olufemi Oke-Osanyintolu, said in a statement.

“No casualties were recorded at the scene as the LRT Fire Unit and LASG Fire Service were all responders at the scene who successfully worked together to put out the fire”.