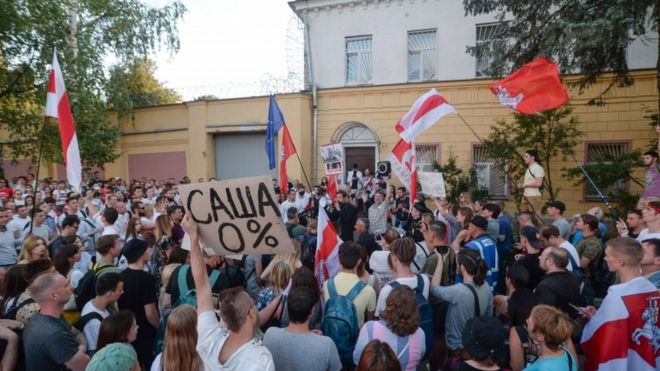 Protesters in Belarus have gathered outside a prison to mark the birthday of the jailed husband of the country’s main opposition figure amid anger over a disputed election.

Sergei Tikhanovsky, who has just turned 42, was imprisoned alongside other rivals of President Alexander Lukashenko ahead of the 9 August poll. His wife Svetlana Tikhanovskaya ran in his place but later fled to Lithuania.

She officially secured about 10% of the vote, and Mr Lukashenko more than 80%. There were no independent observers. The opposition has held daily protests over the past 10 days, alleging massive vote-rigging.

Hundreds of protesters have been wounded and two have died in clashes with police. Thousands have been arrested, and many have spoken of torture at the hands of security forces.