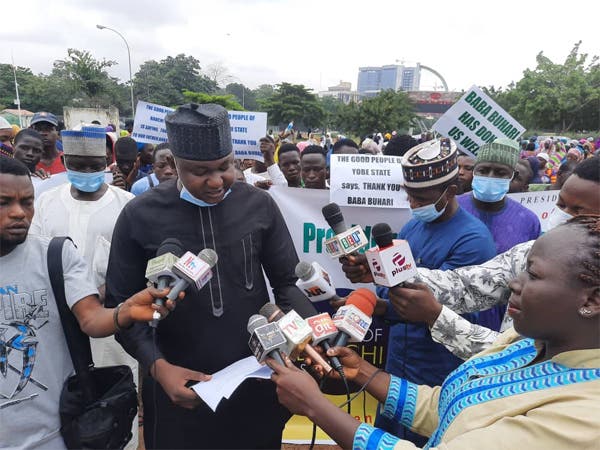 No fewer than 5,000 Nigerians from five states in the northeast, on Thursday, held a ‘Thank You Rally’ at the Aso Villa gate in appreciation of President Muhammadu Buhari over return of peace to their states.

They comprised of natives of Adamawa, Bauchi, Gombe, Taraba and Yobe States, who were once under the shackles of Boko Haram terrorists.

In an address, the Coordinator, said by restoring normalcy to these five states that the president has kept his promise to the people of the region who showed so much confidence in him.

Adamu, on behalf of the Concerned Citizens of Adamawa, Bauchi, Gombe, Taraba and Yobe States admitted that the era of multiple bombings, terror and bloodshed is now in the past.

Attempt on Governor Ortom’s life a shock and rude awakening –...

COVID-19: Nigerians should not be afraid of undergoing tests – Boss...

‘Some people are mercilessly against this country’, Buhari laments