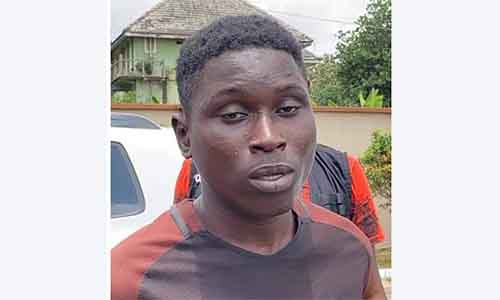 Three days after he was rearrested, the suspected serial killer in Oyo State has revealed how he escaped from police custody and went back into the dastardly act for which he was apprehended earlier. Nineteen-year-old Sunday Shodipe made the revelation on Wednesday when he was paraded along with other criminal suspects at the Police Command Headquarters in Ibadan, the state capital.

Those also paraded by the police include members of a robbery gang suspected to have perpetrated the bank heist in the Okeho area of Ibadan, as well as some suspected kidnappers among others. During a chat with reporters, Shodipe who spoke in Yoruba disclosed that he went back to Akinyele Local Government Area, where he was said to have killed some residents, to perpetrate another killing on the instruction of his handler.

He said, “My escape from police custody was masterminded by my handler, a herbalist known as Mr Idris Adedokun. When we were together in the cell, he called one of the police officers – one Inspector Funsho to allow us take a bath. “Inspector Funsho did not allow us, but after three days, my handler assured me that he had everything under control and that I would soon be able to take my bath and run more errands for him. “He later told Inspector Funsho that he needed dry gin as a herbalist for his personal use but he was denied access to such luxury in detention. My handler’s lawyer came to the police station in Mokola and took N200,000 from him to hold brief for him.”

The suspect added, “My handler told me that my confession landed us in trouble that I should not have confessed. After my escape, I went back to Akinyele on my handler’s instructions and matchetted another woman but she did not die in the process. “While on the run, I usually go to Bodija market with caps to hide my identity because I knew I was wanted by the police. I do not know those who captured me but I suspected when they asked for my help to push their car but I didn’t run.

“I was not at rest because I knew the police were after me. I was caught along Bodija but I live in Moniya.”

Nigerians flock to get PVCs as 2023 Election looms