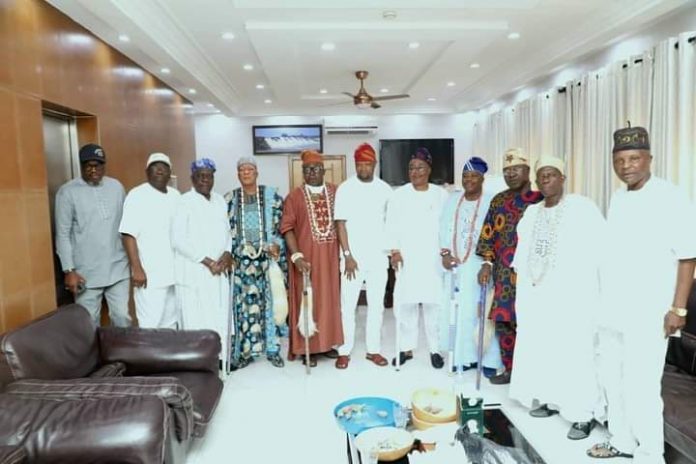 The Royal Fathers in the Badagry Federal Constituency converged on Friday, to discuss the Lagos for Lagos initiative with the Grand patron of Ibile – Eko Forum, Mr. Abdul – Azeez Olajide Adediran. The meeting which was part of the schedule of the 2 – day working visit of the Grand Patron to the Badagry was an homecoming as the Obas express delight in seeing their son take the lead for the Lagos for Lagos initiative.

It could be recalled that Jandor had met with the coordinators of the Indigenous group to fashion out some strategies in mobilization, programmes and empowerment for the people of Badagry Federal constituency. Speaking on the meeting with the Royal fathers, Jandor said, “I met with Royal Fathers in Badagry in a bid to bring everyone on board our #Lagos4Lagos project.”

Jandor noted that the Obas are very crucial to the Lagos for Lagos mobilization exercise which brought about the need to bring them on board. Jandor added that “the meeting turnout was a huge success with the royal fathers expressing joy seeing their Son championing the #Lagos4Lagos project across the five divisions of the State.”

Also speaking, the Principal coordinator of Ibile – Eko Forum, Mr. Bode Benson Makinde, said the meeting is part of the strategies to ensure that everyone that matters join the train. “The Obas are important part of our movement, we have gotten their ancestral blessings and their nod on the Lagos for Lagos initiative and we all agreed that ‘it is time’,” he said.

Also present at the meeting include, the Chairman Strategic Committee of project Titan, Mr. Oluseun Soyinka and a Stalwart of the All Progressives Congress in Lagos State Mr Fouad Oki, among others.

Bye-Elections: We do not have anointed aspirants for primaries – APC