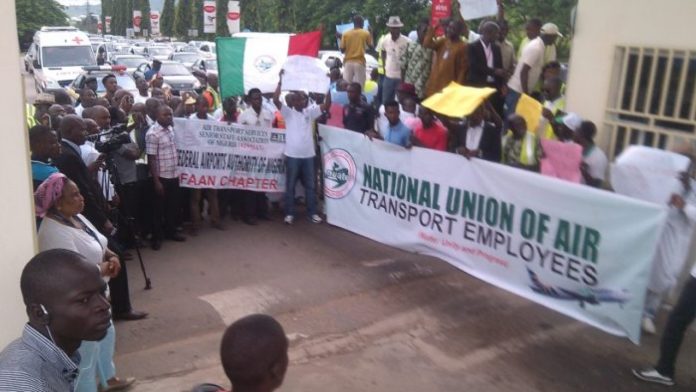 Workers under the aegis of the Association of Nigerian Aviation Professionals, (ANAP), and the National Air Transport Employees of Nigeria, (NUATE), have protested against the planned concession of four International Airports in the Country.

The workers who held the protest at the Ilorin International Airport in Kwara State on Monday lamented that previous concessions by the Federal Government has not yielded any fruit, and handing over the four airports in Lagos, Abuja, Port Harcourt, and Kano to concessionaires, could lead to great loss to the country and loss of jobs to the people. Recently, the Federal Government said it has commenced the concession process after the Minister of Aviation, Hadi Sirika, received an outline business case certificate of compliance from ICRC.

According to the Chairman, Association of Nigerian Aviation Professionals, Sunday Ugbeikwu, the move is not an acceptable one. “The Federal Government in conjunction with Minister of Aviation wants to concession our airports and we are saying no, they cannot concession our patrimony, we inherited it, and it is not in our watch it will happen.”

While listing other facilities and infrastructures, he added that no concession has worked in Nigeria “because we are not transparent and they want to bring it into the aviation industry and we are saying no to the concession. They are not transparent in their policies. “They said they want to draft our pensioners into PENCOM, for your information, FAAN is owing PENCOM to the tune of about N85 billion. If they do not clear those debts, they are mortgaging our destiny,” he expressed.

One soldier killed as troops disperse IPOB arsonists in Imo –...