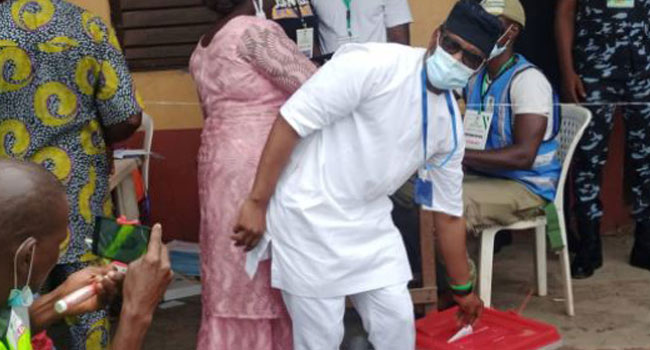 A mild drama played out on Saturday at the Polling Unit of Mr Eyitayo Jegede, the candidate of the People’s Democratic Party (PDP) in the Ondo State Governorship Election. This occurred at Polling Unit 9, Ward 2 in Akure South Local Government Area of the state.

The polling unit is situated at the Sacred Heart Primary School along Cathedral Road in the state capital. Ad-hoc officials of the Independent National Electoral Commission (INEC) had been conducting the exercise smoothly before it was the turn of Mr. Jegede and his wife, Eno.

The PDP candidate and his wife had arrived at the venue at about 9:07am and later joined the queue yo cast their votes. They waited for about two hours in the queue before it got to their turn at about 11:02am. However, the smart card reader failed to read their thumbprints while they stepped aside for the next voter in the queue to get accredited.

A few moments later, the issue was resolved and the couple was allowed to cast their ballots. Despite the development, Mr. Jedede condemned the setback and faulted the long voting time.

Jack Butland: Crystal Palace goalkeeper to have medical ahead of Manchester...

Lateef Jakande @ 91: Ex-Governor an example of why we believe...