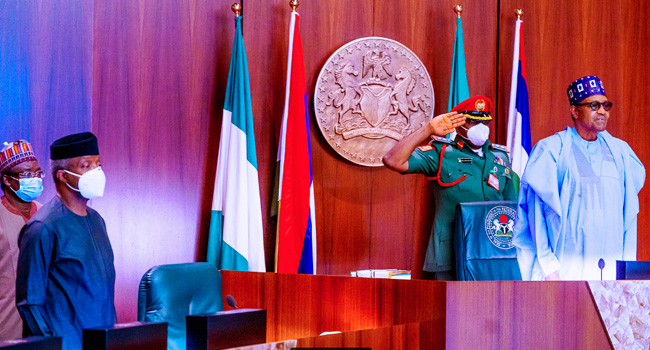 The Federal Executive Council at its 19th virtual meeting presided over by President Muhammadu Buhari, approved Nigeria’s contribution of $2 million to the 2020 budget of the West African Power Pool and over N30 billion for roads in Kano and Lagos.

At the end of the meeting held at the Council Chambers of the Presidential Villa, Abuja, Minister of Power, Saleh Mamman disclosed that the specialized pool covers 14 of the 15 countries of the regional economic community including Benin, Côte d’Ivoire, Burkina Faso, Ghana, Gambia, Guinea, Guinea Bissau, Liberia, Mali, Niger, Nigeria, Senegal and Sierra Leone.

He noted that the West African Power Pool was created by a decision at the 22nd Summit of the Economic Community of West African States Authority of Heads of State and Government in 1999. According to Saleh, participation in the regional market will generate immediate foreign exchange for Nigeria as oil revenue is dwindling.

He said: “The pool is about having synergy within the West African region. The decision has been taken by ECOWAS, it is for the generation of electricity in the region, so as to have constant and steady power supply stating that in case there is a failure in one country, another can supplement. The $2 million is a contribution.”

The Minister of Information, Lai Mohammed, said the council approved over N30 billion for roads in Kano and Lagos as stated in a memo presented by the Minister of Works and Housing, Babatunde Fashola. He added that the sum of N22,247,332,000 for the award of contract for the reconstruction of the Apapa-Oworonsoki-Ojota Phase Section II, an 8.1kilometer stretch road and N8 billion augmentation for the award of contract for the dualisation of Kano-Maiduguri road (about 560 kilometers) were approved.

Chinese citizen tested negative, no case of coronavirus in Lagos –...