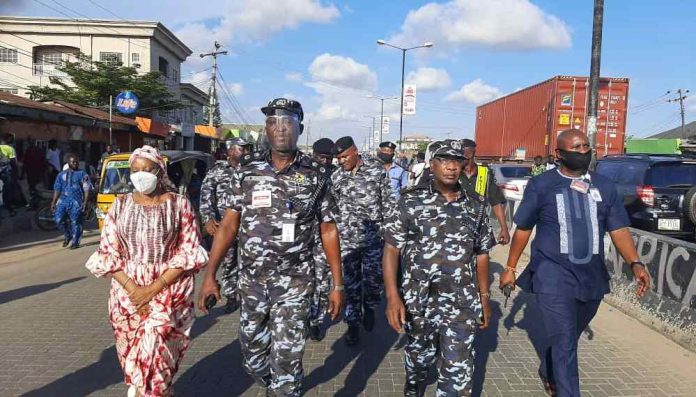 Lagos police spokesperson said #EndSARS protesters at Okota compelled Mr Odumosu and his senior officers to trek for more than 10 kilometres. The Commissioner of Police in Lagos, Hakeem Odumosu, was forced to alight from his car on Monday and trek a distance as he visited the home of a 68-year-old woman that was assaulted by a police officer.

Olumuyiwa Adejobi, the Lagos police spokesperson, said the aggressive #EndSARS protesters at Okota compelled Mr Odumosu to trek in the company of his senior officers for more than 10 kilometres.

“The Commissioner of Police, who had earlier been denied access at the Murtala Mohammed Airport toll gate in Ikeja by Endsars protesters, ran into a similar barricade at NNPC junction, Okota, where the hyper-aggressive protesters insisted that CP Hakeem Odumosu and team alight from their official cars and trek that long distance despite series of explanation and appeal on the command’s mission in the area.

“The Commissioner of Police, like every other officer in Lagos State, who has been professional in tolerating and managing several harassments, intimidations and provocations from the protesters, obliged and trekked for peace to reign.”

Mr Adejobi said the visit to the assaulted woman was to sympathise and apologise to her and her family members and assure them that the arrested police officer will face the Force Disciplinary Committee (FDC) for appropriate punishment.

GROUP CALLS FOR ACCESSIBILITY AND AFFORDABLE TREATMENT FOR CANCER IN NIGERIA