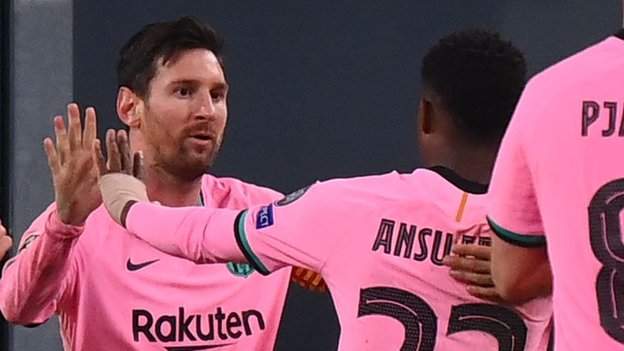 Barcelona provided “the best response” to the “turmoil” off the pitch by convincingly beating Juventus in the Champions League, says midfielder Sergi Roberto. It has been a whirlwind few days for the Spanish giants as they lost 3-1 to Real Madrid in El Clasico on Saturday before the club’s president Josep Maria Bartomeu announced his resignation on Tuesday.

However, they made it two wins from two in this season’s Champions League group stage with goals from Ousmane Dembele and Lionel Messi seeing off a poor Juventus side, who had Merih Demiral sent off late on for picking up a second yellow card. “The best response we could give to the turmoil at the club is a display like this,” said Roberto.

“Everybody has been talking a lot but the team simply want to win games.” Dembele opened the scoring when his deflected shot looped over Wojciech Szczesny in the Juventus goal. Messi then wrapped up the win in stoppage time when he coolly converted a penalty after substitute Ansu Fati had been fouled.