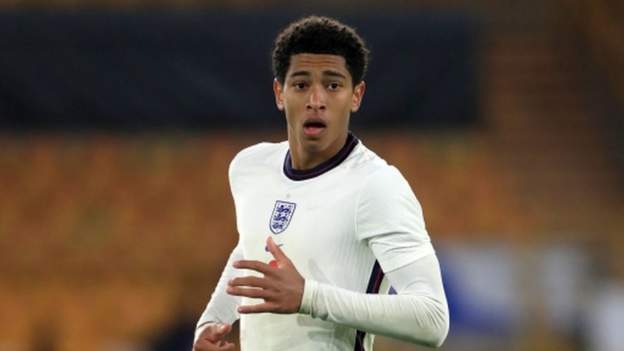 Jude Bellingham has been called up to the senior England squad for the first time. The Borussia Dortmund midfielder, 17, was promoted from the Under-21s after Liverpool defender Trent Alexander-Arnold and Southampton midfielder James Ward-Prowse withdrew through injury.

He joined Dortmund in the summer from Birmingham and has made 11 appearances. England play the Republic of Ireland, Belgium and Iceland between 12 and 18 November. If Bellingham plays in any of those games he will become the third-youngest player to represent England – after Theo Walcott and Wayne Rooney.

Bellingham only made his Birmingham debut in August 2019 but finished the season with 44 first-team appearances before earning a move to Dortmund in a deal that could eventually be worth over £30m. He received his first call-up to England U21s in August, becoming their youngest ever player when he came on against Kosovo on 4 September.

Manchester United striker Marcus Rashford will miss England’s game against the Republic of Ireland as he will not report for duty until Thursday morning following an injury he suffered in Saturday’s win at Everton. After seeing Bellingham promoted from his squad, England U21 coach Aidy Boothroyd called up Everton pair Tom Davies and Ben Godfrey, although Norwich full-back Max Aarons has withdrawn for the games against Andorra and Albania on 13 and 17 November.