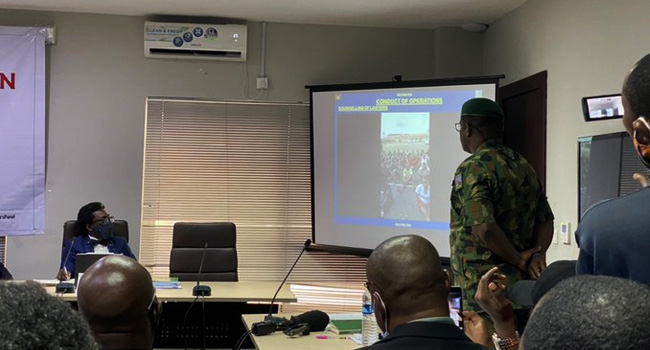 The Lagos State Judicial Panel of Inquiry set up to investigate cases of police brutality and the incident at the Lekki tollgate area of the state has resumed its sitting with the Nigerian Army continuing its testimony.

Commander 81 military intelligence brigade, Brigadier Ahmed Taiwo, speaking before the panel on Saturday, claimed that the events that culminated in the incident of October 20 at the Lekki Toll Gate had its remote causes in the wider EndSARS protest and its immediate causes in the lawlessness that ensued from October 18. Brigadier Taiwo explained that the attack made the Governor of Lagos State, Babajide Sanwo-Olu to call on the army to interfere in the crisis and due to the urgency of the situation, the governor imposed a 24-hour curfew which was to commence at 4:00 pm on October 20 but was later shifted to 9:00 pm.

According to him, the time was not communicated to the Nigerian Army, and troops were deployed immediately upon receipt of the signal to activate phase 4, meaning immediate deployment of soldiers outside the barrack to help control the crisis of internal security. He insists that the troops were not only deployed to the Lekki tollgate, but to other areas like Badagry, Ikorodu, Apapa, Alimosho, Epe, Lagos Island and the entire state to restore normalcy.

Brigadier Taiwo added that the army were shooting into the air at the Lekki tollgate and not at the protesters, backing his statement up with several video clips of what he says transpired that night. Furthermore, he claimed that after the soldiers left the area, hoodlums went on to destroy the toll gate plaza.