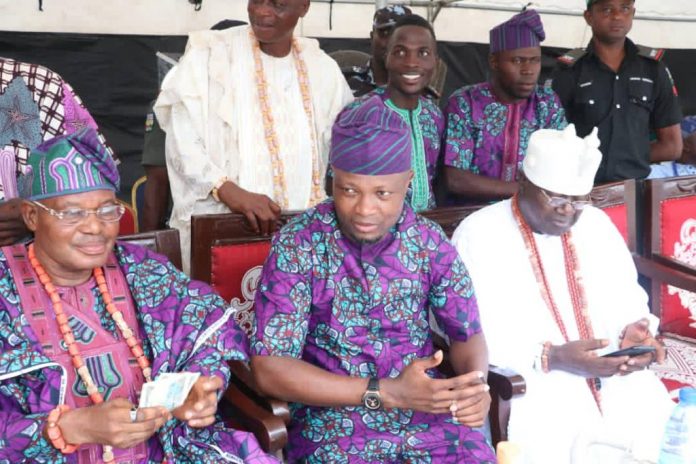 The celebration of the 5 years on the throne of His Royal Majesty,Oba Abraham Olatunji Ogabi (JP) Oyikuli 1, the Onimeke of Imeke kingdom on Saturday, turned reunion as Traditional Rulers,sons and daughters of the Badagry division unite to celebrate the traditional stool. The event which had prominent dignitaries in attendance was thrown into a loud euphoria when the leader of the Lagos4Lagos movement, Mr. Abdul – Azeez Olajide Adediran, arrived in an entourage of renown grassroots politicians and Friends.

Jandor, as he is preferably called, is christened “a symbol of unity” in the division and across Lagos state. Speaking on the event, Jandor said “I joined sons and daughters of Imeke Kingdom to celebrate the 5 years on the throne of His Royal Majesty, Oba Abraham Olatunji Ogabi (JP) Oyikuli 1, the Onimeke of Imeke Kingdom and the installation of my sister, the Chairman Oriade LCDA Hon. Ramotalai Akinola – Hassan as the Iyalaje of Imeke Kingdom.

Jandor noted that “It was good to see all our Royal Fathers turning up for their own, a strong indication of unity amongst our traditional Rulers in Badagry division. Speaking on the Lagos4Lagos initiative which is now a slogan in many households of the 3 senatorial district of the state, he said “We have decided never to go our different ways again, this time, we are uniting for a purpose”.