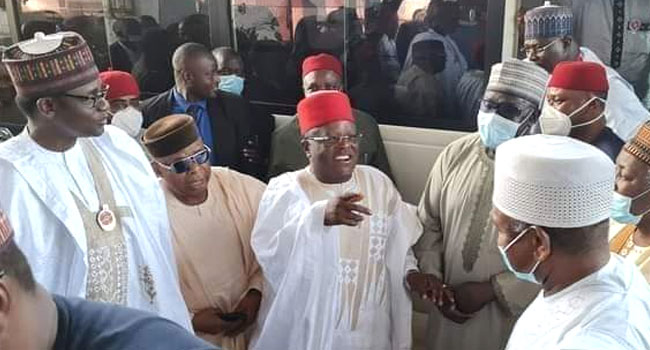 Governors of All Progressives Congress (APC) are currently in Ebonyi State as the state Governor David Umahi officially joins the party. Dignitaries at the event include former Senate President Ken Nnamani, among others.

The Deputy governor Eric Igwe at the event announced that he will be joining his principal in the APC. “Where you go I will go, where you stand, I will stand,” Igwe said.

Governor Umahi in his speech at the official defection announced that “henceforth, Ebonyi is 100% APC. We are all moving to APC.” He, however, called for unity between both APC and PDP, noting that, “Together, we are stronger.”

Umahi had earlier on Tuesday, November 27 dumped PDP for APC after weeks of speculation that he had taken the decision to dump the opposition party for the ruling party.

He also faulted the claims that he left the PDP to achieve his ambition of becoming the president in 2023. While giving reasons for his defection, he said is the South East region has suffered what he describes as injustice in the PDP.

FG has nothing to do with increase in price of petrol...

Tambuwal declares intention to run for presidency in 2023