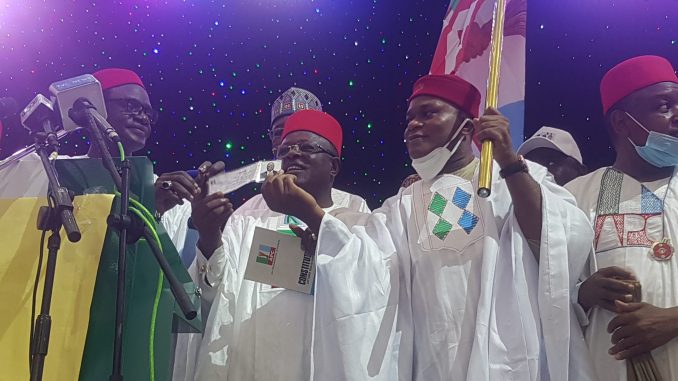 Ebonyi State Governor David Umahi has said that his defection from the Peoples Democratic Party (PDP) to the All Progressives Congress (APC) is a ‘movement into blessings.’ The governor said this on Thursday during his official defection to the APC. “Therefore today, we moved into APC. “The reward for freedom, freedom from dictatorship is here. We are free at last and we have moved into blessings,” the governor said.

Umahi also stressed the need for cooperation to build the nation and urged his counterparts in the south-east to join him in the APC. According to him, the South-East zone is tired of empty promises and needs action instead. “This new house that is built on trust, justice, equity, and fairness is going to accommodate all of us. Together we are stronger. “South-East we all move to APC. We have to launch together, we are tired of empty promises. We want action, in the now,” Umahi said.

The official defection which was held in Abakaliki, the Ebonyi State capita had dignitaries and stakeholders of the APC in attendance. They include former Senate President Ken Nnamani; Chairman, APC National Caretaker Committee who is also the governor of Yobe State, Mai Mala Buni; Jigawa State Governor, Muhammadu Badaru Abubakar; Kebbi State Governor Abubakar Bagudu and Niger State Governor, Abubakar Bello, among others.

Other present at the official defection include the Minister of Justice/Attorney General of the Federation, Abubakar Malami; Senior Special Assistant to the President on Domestic Affairs, Mohammed Sarki Abba, and the Minister of Humanitarian Affairs, Disaster Management and Social Development, Sadiya Farouq.