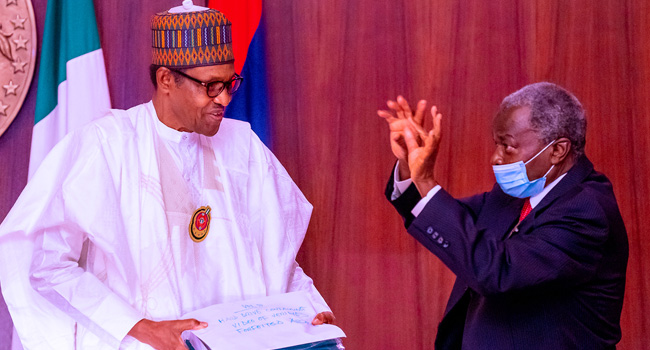 President Muhammadu Buhari has reiterated his administration’s commitment to stamping out corruption, saying no one is too big to be probed. The president said this on Friday, when he received recommendations from the panel set up to probe allegations of corruption in the Economic and Financial Crimes Commission (EFCC) under its suspended acting chairman, Ibrahim Magu.

“Let it be known that in the fight against corruption, no one is too big to tackle, as no individual is bigger than the Nigerian State,” President Buhari said. “We recognize that there are more grounds to cover in the war against corruption, and we are prepared to go out to possess those lands by cutting off any stream that nourishes the seed of corruption and supports its growth.”

The panel, headed by a retired justice and president of the appeal court, Ayo Salami, presented the reports contained in 4 boxes to President Muhammadu Buhari in the council chambers of the presidential villa, after over three months of probe.

President Buhari frowned on the fact that an investigation had to be instituted to probe an anti-corruption such as the EFCC, saying it shows how deep-rooted the menace is in the country. Meanwhile, Justice Salami has recommended that the next head of the anti-corruption agency should come from outside of the Police Force.

Sunday Igboho: We are doing the needful to ensure justice –...

Tinubu returns to Nigeria after 10 days of ‘consultation’ in UK

#JusticeForBamise: Outrage as lady who boarded BRT in Lagos is reportedly...