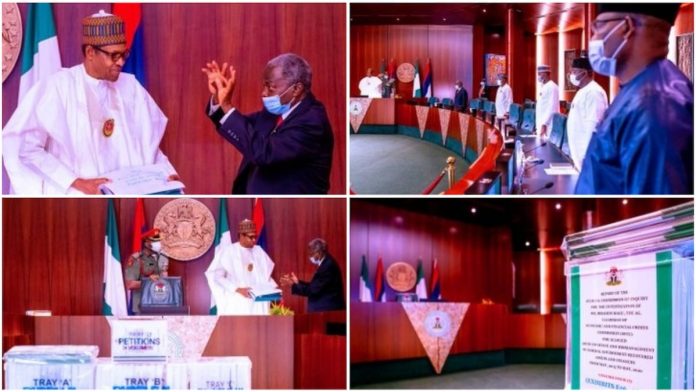 After over three months of investigations into the activities of the Economic and Financial Crimes Commission (EFCC) under its suspended acting chairman, Ibrahim Magu, full reports of the investigation have been submitted to the president.

The panel, headed by a retired justice and president of the appeal court, Ayo Salami, presented the reports contained in 4 boxes at the council chambers of the presidential villa.

President Muhammadu Buhari inaugurated the panel in July and was given 45 days to carry out the assignment but the time frame was extended further after the panel requested for more time.

It was mandated to probe allegations of corruption and abuse of office leveled against Mr Magu by the Attorney General and Minister Justice, Abubakar Malami.

Reports say the panel chairman had earlier submitted a summary of their findings to the president’s Chief of Staff, Prof Ibrahim Gambari.

Aymeric Laporte switch from France to Spain approved by Fifa