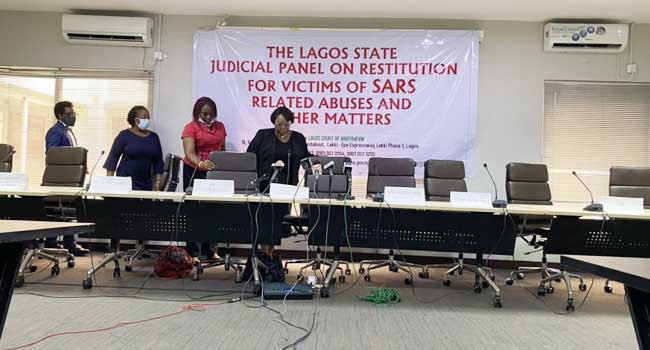 The Lagos State Judicial Panel of Inquiry investigating the Lekki tollgate incident and other SARS related abuses and matters on Friday continued its sitting and the cross-examination of petitioners.

During the cross-examination of the petitioners, the panel will continue its hearing from Ndukwe Ekekwe who alleged that the officers of the defunct Special Anti-Robbery Squad (SARS) beat him up and then transferred him to their office in Ikeja. Beyond the beating, Ekekwe said he was stabbed at different parts of his body by the officers, and later taken to his shop at Alaba where they broke in and started auctioning his products.

Thereafter, as he started shouting for help, he said the officers took him up a two-story building and threw him down – an incident which caused him to break his spine. In its last sitting, the panel also heard the case of a couple, Okechukwu Obechina and Nzube Obechina.

Mrs Nzube Obiechina during her first appearance before the panel on October 31st said she lost her two-month pregnancy while being detained for 22 days at the Special Anti-Robbery Squad (SARS) in Ikeja, Lagos State. Before its last sitting, the panel had gone on a one-week break following the absence of youth representatives.