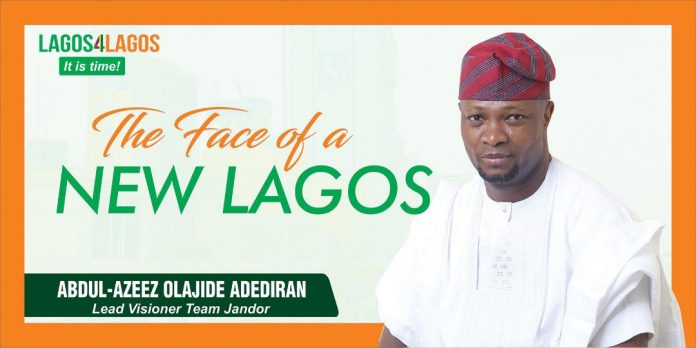 Thousands of Lagosians on Wednesday, 25th November honoured the leader and initiator of the Lagos4Lagos movement, Mr. Abdul-Azeez Olajide Adediran, with prayer sessions followed by celebratory funfair all across each and every one of the 20 Local Governments and 37 Local Council Development Areas in the state in commemoration of his 43rd birthday anniversary.

Jandor, as he is fondly called, disclosed during a press conference held at the Liberty Place, the state secretariat of the Lagos4Lagos movement in Ikeja, that the Lagos state government may have prevailed on the management of the Police College, the initial venue designated for the celebrations, to withdraw the approval earlier granted the movement for the use of the venue purely for political reasons.

The initiator of the Lagos4lagos movement also recounted his ordeal and that of his followers which is more like a political witch-hunt because of the continuous growth of its membership base across the 3 senatorial districts of the state. He said, “Two of the events which were to hold at Michael Otedola College of Primary Education, Epe and Lagos state University, where I was invited as a guest speaker, the government prevailed on the hosts to botcher the events.”

“Every of their plans turned out to be a blessing, today, every Local government and LCDA are celebrating not just me but the Lagos they envisioned and it will definitely come to pass,” he added. Meanwhile, the live streaming of the event which was held simultaneously across the state witnessed a large turnout and the people’s declaration of their total support for the Lagos4Lagos project.

Speaking at the sideline of the event hosted at the Liberty Place, the chairman of the ‘Jandor @ 43 birthday celebration’, Mr. Olabode Benson Makinde, said the celebration across the state is unprecedented and the first of its kind. “We want to thank all Lagosians and of course the supporters of the Lagos4Lagos project for the show of love and consistency,” Makinde added.

INFORMATION OFFICERS CHARGED TO BE PROACTIVE

NNPC Limited to kick off in six months – Sylva

Why Xenophobic attacks will not be discussed at UNGA – Onyeama