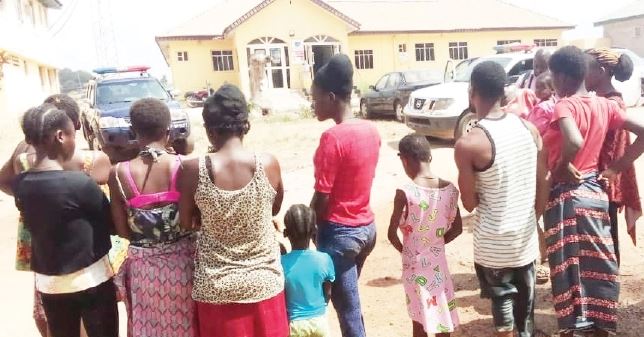 Police officers in Ogun State have uncovered a baby factory at Ofada-Mowe in Obafemi-Owode Local Government Area of the State. Ten victims including four pregnant girls and four children were rescued.

The rescued girls are between the ages of 13 to 24 and are from the southern states of the country. One of the victims, Chidera Onuorah said she was lured from Imo State to Ogun State by the owner of the facility, revealing that she escaped because she didn’t want to sell her baby. She revealed that a boy child is sold for N250,000 while a girl child is sold for N200,000 at the facility.

Speaking on how the operation was carried out, the police spokesperson, Abimbola Oyeyemi, said the baby factory was uncovered after one of the victims escaped and reported at the Mowe police. The victim told police that the owner, one Florence Ogbonna, hired men to impregnate them and then sell the newborns for profit.

“The operator of the centre is on the run but we are intensifying efforts to arrest her and bring her to justice,” Oyeyemi said.

Lassa fever kills one in Borno, three others hospitalised

‘My emotions got the best of me’: Desmond Elliot apologizes over...