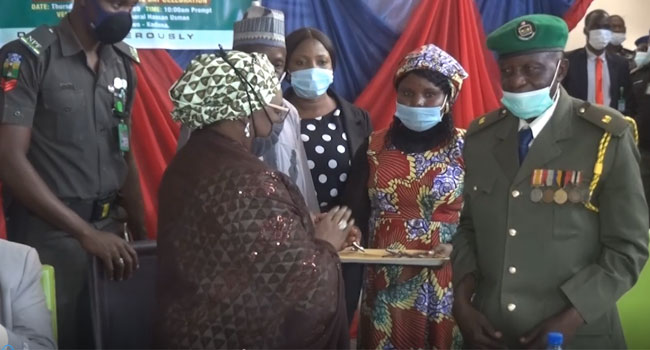 The Federal Government has been urged to engage the services of war veterans and retired soldiers in the fight against the Boko Haram insurgents in the northeast, bandits in the Northwest, and other criminal elements that are terrorizing various parts of the country.

Speaking during the launch of the emblem appeal fund for the 2021 Armed Forces Remembrance Day in Kaduna, the state chairman of the Nigerian Legion, Danjuma Bari expressed dissatisfaction over the rising insecurity in the country, stating that the performance of the military towards tackling the problem not enough.

He said that the ex-military officers are ready to assist the Federal Government to fight Boko Haram and other security challenges in the country. While claiming that the present crop of soldiers in the country today are more interested in monetary gains and social aspects of life, at the expense of the nation’s sovereignty, the Chairman of the Nigerian Legion decries the inhuman condition of retired soldiers, despite their sacrifice to their fatherland.

He, however, called on the federal government to improve the welfare of his members by improving their pension as well as providing them with other welfare packages that will make their lives better. Launching the emblem was the Kaduna state governor who was represented by his deputy, Mrs. Hadiza Balarabe.

Mrs. Balarabe commended the men and women of the armed forces for the various roles they play to ensure the peace and unity of the country, despite the challenges of terrorism, banditry, kidnapping menacing many communities in the country.

Several feared dead as truck rams into schoolchildren in Lagos

MILITARY MEETS WITH THE MIYATI ALLAH TO SEEK LASTING PEACE

BREAKING: Buhari signs 2022 budget, displeased with changes made by NASS