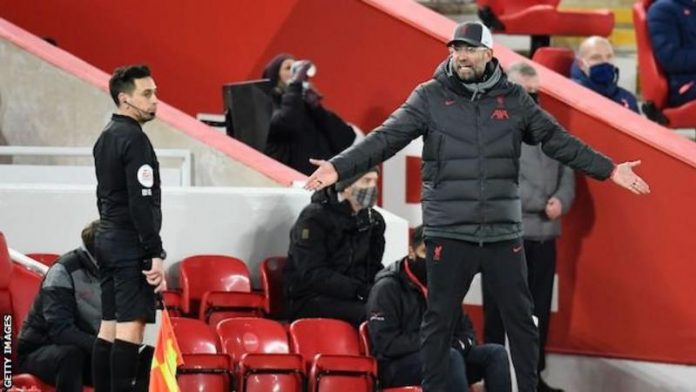 Liverpool manager Jurgen Klopp has criticised Premier League clubs for voting against the use of five substitutes for a third time. The Premier League is the only top division in Europe not to have allowed five substitutes for the 2020-21 season. Clubs did, however, vote to increase the number of players allowed on the bench from seven to nine. “I’m not sure it’s a compromise,” said Klopp.

The club vote came after football’s lawmakers, the International Football Association Board (Ifab), confirmed an extension to the rule on Wednesday. Clubs were able to use five substitutes, and have a bench of nine, when the Premier League 2019-20 season resumed as part of Project Restart in June. However, they chose to return to three at the start of the current campaign.

Klopp has previously criticised Premier League executives for “ignoring player welfare” in not increasing the number of substitutes. His side are missing several key players through injury, including defenders Virgil van Dijk and Joe Gomez, midfielder Thiago Alcantara and forward Diogo Jota.