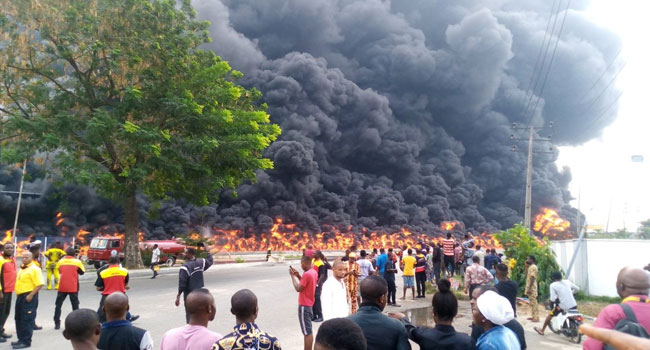 A tanker fully loaded with Premium Motor Spirit exploded on Thursday, at Toyota Bus stop, Oshodi-Apapa Expressway in Lagos. Firefighters have since arrived at the scene of the incident and are battling the fire as of the time of filing this report.

Officials of the Lagos State Traffic Management Authority are also on the ground diverting vehicles to alternative routes. According to eyewitnesses, the tanker fell on the road around 9.15 am spilling its content and eventually exploding in front of the Lagos State Fire Service on the Oshodi-Apapa expressway.

The Federal Fire Service in an update on its official handle shared photos of firefighters at the scene and noted that “the tanker fire situation at Toyota Bus stop, along Oshodi Apapa Expressway, Lagos State has been brought under control.”

MPC MEETING ENDS WITH A RAISE IN MONETARY POLICY TO 12%