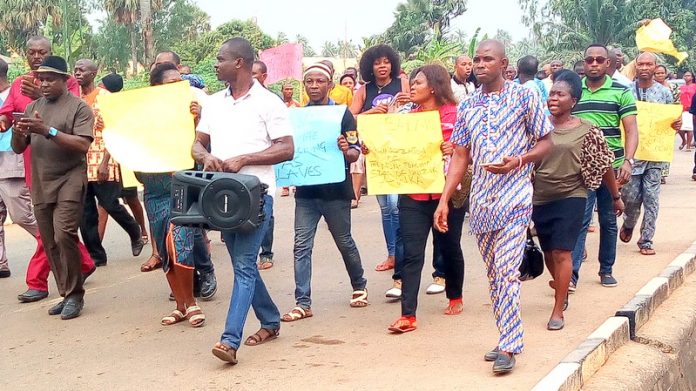 The Joint Action Committee of Non-Academic Staff Union (NASU) and Senior Staff Association of Nigerian Universities (SSANU) has commenced a three-day national protest. The protests follow an earlier statement by the NASU General Secretary, Peters Adeyemi, and the SSANU President, Mohammed Ibrahim calling on all members in branches of Universities and Inter-University centres across the nation to embark on industrial action.

The protesters in Abuja comprising members occupied the main gate of UNIABUJA Main Campus. The members are protesting over irregularities in Integrated Payroll Personnel Information System (IPPIS) payments, non-payment of Earned Allowances, non-payment of arrears in minimum wage among others. They are also protesting the sharing formula of the N70 billion given the universities by the Federal Government.

They insist that the 75 percent and 25 percent sharing formula for the earned allowances does not favour their members. Other issues include the delay in the renegotiation of FGN, NASU and SSANU 2009 agreement, non-payment of retirement benefits of outgone members, neglect and poor funding of state universities, and non-constitution of visitation panels for universities.

Monkeypox cases rise to 157 in Nigeria