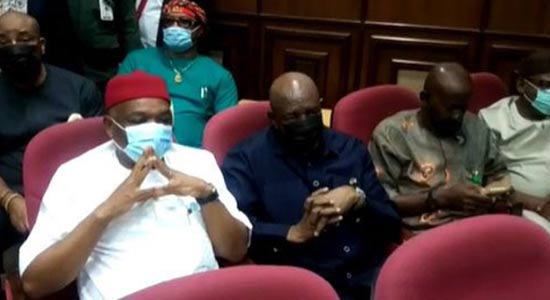 The Economic and Financial Crimes Commission (EFCC) is seeking the transfer of Orji Kalu’s case file from the Abuja division of the Federal High Court to the one in Lagos State. It will be recalled that Senator Kalu, who was the governor of Abia State from 1999 to 2007, was earlier found guilty and handed a 12-year jail term by the Lagos Division of the court.

The trial court convicted him alongside his firm, Slok Nigeria Limited, and a former Director of Finance in Abia State, Jones Udeogu, for allegedly stealing about N7.1billion from the state treasury. At the court session on Tuesday, counsel for the EFCC, Chile Okoroma, informed the court of a pending letter before the Chief Judge asking for the transfer of the case to Lagos.

Okoroma said the Chief Judge is yet to respond to the letter which was written in line with the judgment of the Supreme Court ordering the prosecution to try Senator Kalu afresh. Okoroma said none of the offences allegedly committed by Kalu took place in Abuja and that the Supreme Court has held that the case cannot be heard in the FCT.